It was a world of pre-departure cocktails, in-flight spa treatments, and post-arrival shower facilities. There was Fast Track and “Sir, Welcome Back”. Various lofty words, gemstones, and precious metals confirmed my superiority; I was “Envoy”; I was “Sapphire”; I was “Gold”.  Occasionally, the Utopian combination of “Executive Platinum” would announce my arrival in the highest echelons of flying society. All that remained was to remember to smile and wave as I confidently strode to the luxurious seats at the front of the aircraft.

For each of the last 22 years, I have enjoyed “status” on at least one of the world’s major airlines.

There can be few things better equipped to remind a recently-former privileged traveler of their dramatic change of circumstance than a three-hour wait at a departure gate in New York’s La Guardia airport; a location that must have been purposely designed to extinguish any lingering vestige of excitement from the flying experience.

A crowd swelled and sweated and shuffled around me. Its participants, each oblivious to the existence of their fellow travelers, were stealthily advancing their positions as if engaged in a childhood game, hoping not to be noticed by the airline personnel staring busily at their computer screens.

As my elbows struggled to maintain their domination of my chair’s armrests, my thoughts turned to the relative calm of the airline lounges of my recent past – with their small triangular sandwiches, their complicated coffee machines, and their free beer. Today, it seemed as if such oases belonged to a land as distant and surreal as last night’s vaguely remembered dream. And then my reverie was broken as one more suitcase (apparently loaded with house bricks) rolled over my toes.

Exasperated, I took to staring at my boarding pass.

But my eyes were not focused on its words – although I’ll admit that reading “Boarding Group 8” was unexpectedly emotional. Instead, I was contemplating the blank space that, until a month ago, had been occupied by a single word. GOLD.

Its absence sent me tumbling down memory lane.

For more than two decades, all of my boarding passes had displayed similar recognition of my preferred customer status with my chosen airline. Before that time, back in the early nineties, when every penny I had – and many more that I didn’t – fed my burgeoning travel obsession, I scarcely gave a thought to the world on the pilot’s side of the cabin curtain. It was a distinction as irrelevant as it was elusive. My purpose was to go and explore; I didn’t think about the comfort I’d have on the plane that transported me there.

Then, in the late summer of 1995, I was invited to interview for a job in Moscow.

While the possibility of working in the Russian capital was intriguing, the prospect of an all-expenses-paid trip to a place I never expected to visit appealed to my inner travel mercenary. It was a simple equation: I would take the trip, decline the job, and return to my safe and familiar London desk.

The flight from London Heathrow to Moscow’s Sheremetyevo airport was to be my first ever in business class. To add further mystique and exclusivity to the experience, British Airways simply called it “Club” – conjuring up images of secret handshakes and knowing, self-satisfied glances exchanged between its members; the glitterati of the air.

With my induction into the Club just days away, I fretted about what to wear. I genuinely thought that, were I to show up at the airport in jeans, I would not be allowed to board the flight. In a moment of slightly more irrational fear, I also imagined being hounded out of the terminal as a group of impeccably dressed, Filofax-wielding business people laughed and pointed behind me. I decided to wear a suit.

I arrived in a dark, forbidding, ridiculously cold city with absolutely no intention of accepting the job.

A travel mercenary strolls around Red Square in November 1995

As it turned out, my ascent into the mysterious world on the other side of the cabin curtain (and the recently dismantled iron curtain) played out against the backdrop of the ostentatious wealth and the receipts-optional corporate expense policies of my new home city. By comparison, the higher cost of traveling in a slightly more comfortable seat nearer the front of an aircraft felt puritanically frugal. 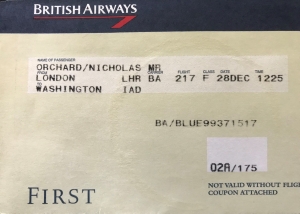 A First in First Class

It was a time when expatriate packages (another legacy of a bygone era) were generous to the point of embarrassment. Such largesse quickly made a seat at the front of the aircraft a regular and realistic option, even when my employer wasn’t providing the funding. Consequently, the color of my British Airways Executive Club card quickly changed from blue to silver to gold. I ascended the ranks of Swissair and Lufthansa with similar speed.

Yet, other than a slightly more polite check-in experience and access to departure lounges that often required advanced orienteering skills to locate, the privileges of rank were sparse.

Back in those days, the internet was still largely a figment of Al Gore’s imagination. Online booking was rare and unreliable, and airlines had yet to grasp the full potential of loyalty programs to ensnare their unsuspecting passengers. However, whether or not you had “status” with the airline and irrespective of the cabin in which you chose to travel, the process was simple; you booked your seat, you paid the fare, and that was that.

In the aftermath of the global financial crisis, with multiple airlines flirting perilously with extinction, a new philosophy was born: Consider every single aspect of the flying experience – and charge for it.

Now, after we’ve booked our seat, we pay for the decadent comfort of an extra two inches of leg room. We pay for pillows. We pay for blankets. We pay for earphones. We are asked to pay an extra $49 to wedge ourselves into a middle seat. 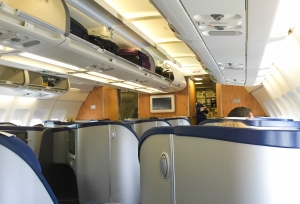 Until this year, I had been happily ignorant of the increasingly inventive catalog of additional fees levied upon the flying public. Although it has been a long time since my wife and I have purchased a seat in anything other than economy class, we still traveled frequently enough on long distance routes to maintain our status level and, thereby, evade the charges lurking behind every mouse click. Until this year.

But the cost is not purely monetary.

The imposition of checked baggage fees has created a national emergency in basic arithmetic skills. We are constantly reminded that we are allowed to take on board one bag and one personal item, but it seems as if the ability to count to two has been lost.

The demise of the free in-flight meal, with its uniform odors of baked chicken and pasta, has sent a pungent combination of fried food smells wafting around the shared air of our sealed metal tube.

And the reward for our patronage? We are crammed into overbooked flights with overheated people in whose company we will spend a few hours in the kind of close proximity that, anywhere else, would generate lawsuits and hashtags.

“We now invite passengers in group eight to board.” The words shook me back to the present.

As we made our way to stand in the queue with our similarly unranked flying companions, I realized that these new inconveniences have not deprived my inner travel mercenary of his unquenchable thirst for conquest. For a couple of decades I was lucky enough to enjoy the comparative luxuries afforded to a flier with “status” but, now those luxuries are gone, my purpose is still to go and explore; the comfort of the journey is still incidental to the experiences waiting at the destination.

And then, with a smile, I recalled the moment that marked the start of our return to the higher-numbered rows.

During our years in Moscow, my wife and I quickly grew accustomed to our flying comforts. But shortly after we said goodbye to the city – and its attendant benefits – economic reality struck; a situation that did not go unnoticed by our four-year-old daughter.

Already a seasoned traveler by this age, she confidently led the way onto a transatlantic flight and instinctively turned towards the business class cabin. As we ushered her away from the lay-flat luxury and towards the back of the plane, a confused expression spread across her face as she observed the tightly packed seats. When finally we stopped, somewhere around row 59, she turned to us and, forgetting to use her inside voice, demanded …

I didn’t have the heart to tell her it might be a while.

3 thoughts on “The Other Side of the Curtain”